So things were a bit of a roller coaster for me, and I’m spending too much time on the 3D printer (also building a new one from scratch…), hence the lack of update.

So firstly, while filling I actually spilled water onto the NUC! I almost cried but then I remembered it wasn’t powered on. So I made a sealed rice box with 4 people’s worth of dry rice, and put the whole thing in it. My family didn’t get to have dinner that evening.

After a couple of weeks I took the thing out, hoping that it’s totally dried, and plugged it in and pressed the button… NOTHING. Pressed a few more times, still nothing. Folks, you should see my face when I killed a few hundred pounds worth of machine due to my own clumsiness. So I put it back to the rice box and cried in a corner.

Another couple of weeks went by I was deciding whether to throw it all away, but before that I gave it one more go. And… still nothing. But then a light bulb appeared over my head and maybe, just maybe, the button cell battery is dead (which partly because I was replacing the battery on my car’s remote key minutes prior). So I swapped it with a new one, and VIOLA! IT’S ALIVE! Then I quickly finished the rice in the rice box.

This is an Alphacool Esiberg 240 expandable AIO with a 240x30mm full copper radiator, two 1600rpm 120mm fans, and a pump-block-res in one unit. It’s an overkill for the NUC for sure but for curiosity sake I had to know how it performs.

It’s using the crappy brackets from last time to mount the AIO, which is actually really secure. 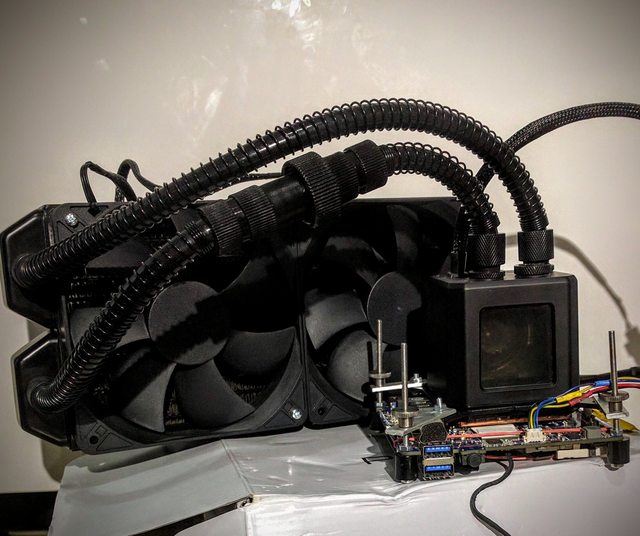 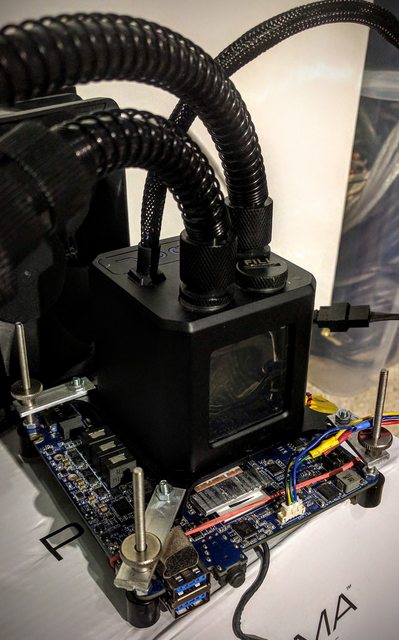 Apologies for crappy pics. My office is a total mess at the moment. But I hope you get the idea.

Again the north bridge was only cooled by a small aluminium plate for now. I can’t use the Noctua NF-A9 fan on it obviously so I’m using the original Alphacool fans.

This is of course not a practical end solution, but who needs practicality anyway? Next time we need to go BIGGER.