This month I have fitted the pièce de résistance !!

I bought a set of cream leather interior, with a pair of Cobra Daytona recliner seats at the front, and a re-trimmed hatch rear bench. The Daytonas are soooo supportive! I love them! 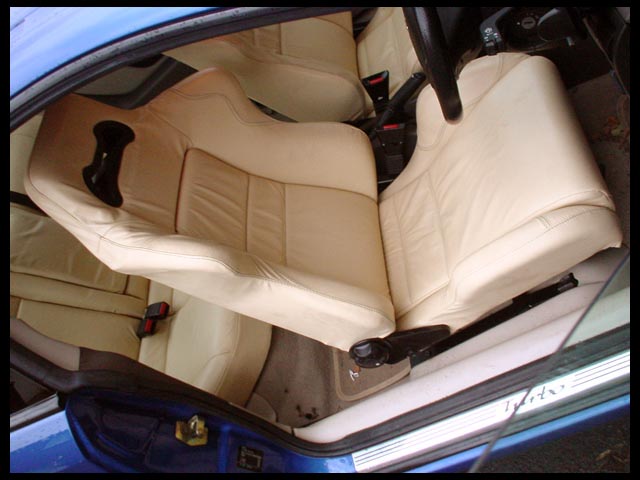 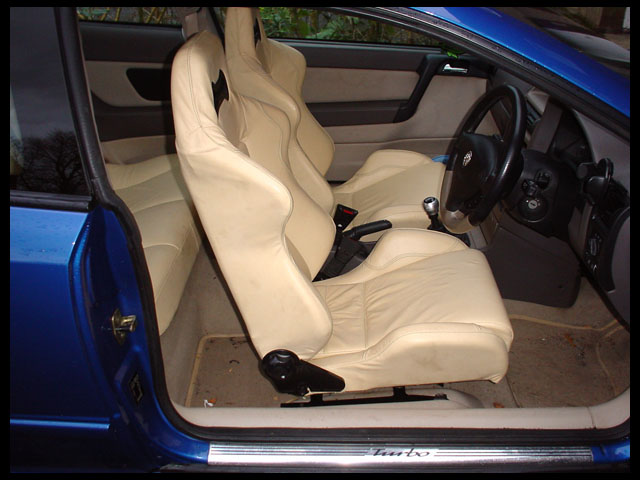 Fitting the rear was straight forward (well, reasonably), except my hands were cut all over due to Vauxhall insisting on using T45 Torx screws instead of proper bolts… and obviously they are naturally stiff, which made a few scary moments of nearly rounding them off.

My Coupé was originally a four-seater, but the rear bench has the fifth (middle) seat belt fitted into it – so I had to somehow convert mine into a five-seater. It sounded easy, but it was actually pretty confusing.

There were originally two seat belt buckles bolted onto the floor, one NS one OS. But, there is also a buckle attached to the rear bench for the NS seat belt… which I thought for was for the middle belt. The solution is to remove the original NS buckle, and bolt it on the OS next to the original OS buckle, and use it for the middle belt. Then I used the buckle on the rear bench for the NS belt.

Fitting the front seats was proven more problematic. The OS one was removed and fitted without too much hassle, as the ones I bought came with the correct subframes already. Well, detaching the airbag connector took a while due to the stupid clip, but it was reasonably easy, just time consuming. Doing the NS however, was a nightmare!! Basically one of the stupid T45 Torx screws was stupidly stiff and nearly rounded off. I spend many hours trying to undo it, with T50 bit, Pozi bit, hammering a socket on, etc to no avail. At the end I had to pay a bodyshop 10 quid to weld an M8 bolt on top of the stupid thing, and undo it with a breaker bar. You should really see the amount of thread-lock on it!! I will definitely replace all these stupid things with proper bolts.

Anyway its all done! And they are reallllllly good to sit on! Everyone commented on how posh they look too 😀