The Parhelia is very good card indeed. One problem with it, however, is that it runs extremely hot. I didn’t measure the exact temperature, but I suspect it is in the range of 50-60 celsius.

Before the modding begins, I managed to get it to 238 core 596 memory relatively stable (default 217/542). The max I’ve gotten from the card was 241 core 640 memory, but that was on an extremely cold day and I had my window wide open… the room temperature was like 10 celsius and I had to leave the room while benchmarking.
This implies that HEAT is the very bottleneck of my overclocking advanture.

So, to get better results, I had to mod it.

My objectives as to the mods are:
1. to be able to remove all the mods are restore it back to the original state in case I need to RMA it in the near future;
2. all copper;
3. look cool (subjectively…);
4. not only core HSF, but also ram sinks;
5. and, apparently, good cooling.

I searched for a while looking for the best 1U copper HSF on the market.
A list of the candidate and details here:
https://forums.matroxusers.com/showthread.php?s=&threadid=39034

While the CoolJag (Dynatron) one is obviously the best, it is a bit too expensive.
Moreover, the ThermalTake one is immediately dropped out of competition 🙂

For the rest, I needed to choose between Fin and Pin HSF design…
At the end I chose the Akasa Iccile 350 because it is immediately available, in good size and the Pin design gives me a bit of flexibility (see later).

Okay then, I need some ram sinks.

The infamous TweakMonster ones were apparently very good, until I saw the price tag… 11 pounds for only 4 of them? I don’t think so 🙂

Later then I saw the CoolerMaster ramsinks and I immediately said to myself, this thing is cheap!! (relatively, comparing to TweakMonster ones)
The Aluminium ones are just… what? 2 pounds! But the Copper ones are a bit more expensive, but it is still cheaper than TweakMonster ones.
The cooling is not going to be as good as the TweakMonster ones due to the height, but I don’t have much choice.

Actually, I do. I have cut some P3 HSF into pieces that just fit. They are black anodised Aluminium. But, they don’t look as cool! I do know that Copper and Aluminium are not much different in this situation… but… I really want some Copper 🙁

There is one problem though. The BGA ram chips on the Parhelia are about 12x12mm, while the base of the CoolerMaster ram sinks is 22x8mm… it is not going to cover the entire area, and it would be too long too!
After consulting with some knowledgeable geeks, they said that it would be okay. Let’s see how it goes.

Oh by the way, the ram sinks come with thermal tape so I don’t have to use Arctic Silver epoxy, hence I am able to take them off at any time.

On to the modding…

This is THE original Parhelia. The victim of the modding. 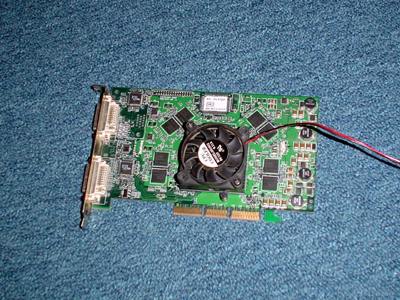 The fan is changed to a higher CFM 50mm fan, instead of the original 40mm crap fan.
It wasn’t stable at 238 core overclock until I changed to this 50mm fan.

Apparently I now need to remove the original HSF.
To do so, I…
1. Used a plier to remove the two mounting bolts (did it gently);
2. Used a hair dryer to heat the entire thing up a bit;
3. Thermal material became less sticky, so remove the heatsink! 😀 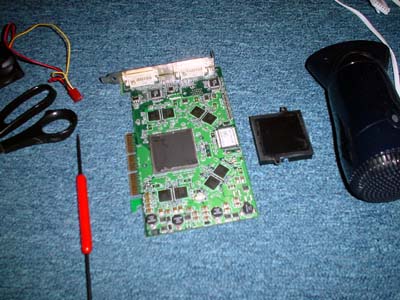 That black glue thing is quite ghetto/cheapo/tacky, don’t you think?
To remove this black glue thing from the chip, I was originally going to use a shape knife… but then I was worried about unwanted scratches on the chip. So I heated it up again and used my FINGERNAIL to remove it… >_< 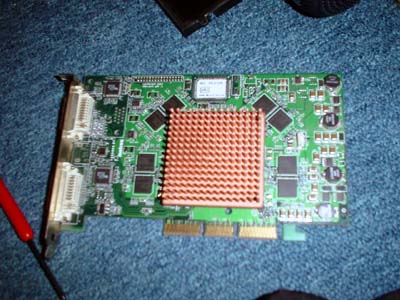 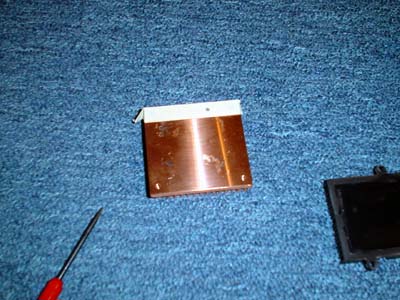 I used some masking tape on the back and test fit it again, so that I can use a pencil to mark the mounting hole from behind.
I then of course drilled a hole, so that I can mount it somehow without the need of thermal adhesive.

However, in the mean time… 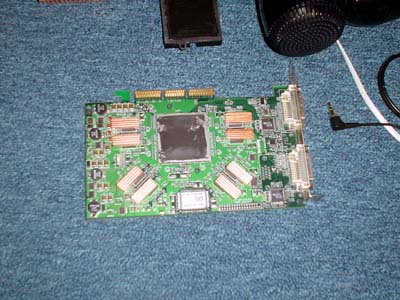 Ram sinks applied 😀 Looks better than I though!!

Okay, I spent 20 minutes trying to drill a hole non-stop. Copper is much harder to work with than Aluminium… or I really need a better rotary tool.
But anyway, it is done. I applied some Arctic Silver 3 (of course), and two drops of super glue on two corners, because I am worried about the weight of the Copper thing… 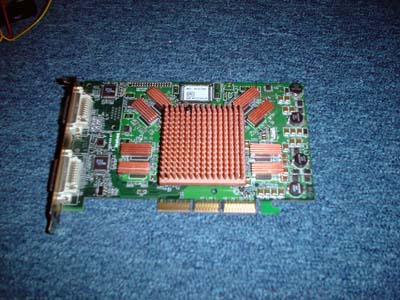 About the hole… I used bolt + nut to secure the heatsink.

Now does it look good? 😀 Very copper-ish. I told you Copper looks way better than Aluminium!!!

But… hmm… did I miss something? Oh yeah the fans!! 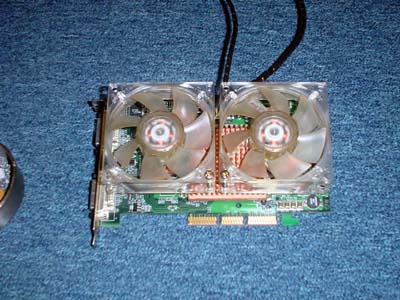 Haha… if I’m doing it, why not do it to the extreme? 😀 Two 80mm fans mounted!!!
Use the original 26CFM 60x60x10mm fan? No I don’t think so 😀
To make things even cooler (visually), they are blue lighted fans too! Produced by CoolerMaster.

However, I do know this thing is heavy, and it might damage the components. With my rough estimate… the whole thing now weights more than 0.5kg, actually close to 1kg I think!

No I don’t want it to die yet… it costed me 300 pounds…
So I made this little “device” to support some of the load. 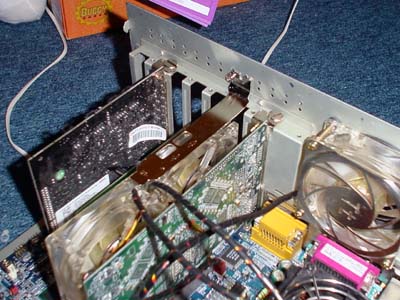 This is made the PCI slot bracket of a PCI USB card.

(update: I removed one of the fans after a month or so because I am still worried about the weight.)

So, the modding is done.I cannot measure the exact temperature because I don’t have any good equipment.
And I have not done any benchmarking yet because housemates are watching movies on the Parhelia TV-OUT!(Update: After a bit of testing… I can go 238/652 completes benchmarks, and the max I can go for is 241/655, but only stable when weather is very cold.) But with my “finger test”, the PCB is not very hot now and the ram sinks are not warmer than the PCB at all!

HSF and ram sinks bought from https://www.theoverclockingstore.co.uk
Not very cheap there but delivery is free.

Check out https://www.wywywywy.com for updates and high res pictures.