This month sees me fiddling with the lights 😀

Before even I bought the car, I knew I would change the lights. Not because the standard ones are crap, just that the aftermarket ones look so much better.

First off is the FK Angel Eyes headlights . First of all I gotta say, when people say the light output from the FK Angel Eyes was crap, I was like “how bad can it be anyway?” And how wrong was I!!! The light output from these lights was phanomenally crap!!!! But they look cool anyway. By the way I didn’t replace the light bulbs in the rings with LEDs, because many people have problem with them, possibly due to the heat. There were some problems (well quite a few actually) when fitting these lights.

Problems:
1. The main beam and dipped beam connectors were the other way round (wtf?!)
2. The LHD/RHD “switches” were impossible to switch, I had to disassemble the light units, trigger the switches, then refit
3. The electric height adjustors were a nightmare to fit in, took me hours!
4. The manual light adjusting mechanism can break quite easily if not careful…
5. The light output is REALLY crap
6. I broke some brackets on the bumper while fitting it 🙁
Overall they are crap, but they look cool.

To combat the crap light output problem, I also ordered some HID light upgrade kit 😀 Bought these on eBay shipped from China and it took only 3 days, very impressive. These are 8000k , which is not as blue as I thought. Fitting the bulbs and wiring was rather easy, took only 10 mins if that. Finding somewhere to hide the control boxes was a problem. It was recommended these boxes are placed on the empty spaces beneath the headlights, but mine are slightly larger then the ones other people have, and didn’t fit the spaces. In the end I had to use the lower headlight mounting bolt to secure the driver side box, and use many cable ties for the one on the passenger side onto various cable looms and holes. The light output is now fantastic! I think I will get HID for every car I own in the future 😀

Also fitted but not pictured, is a pair of black Lexus style rear lights (the new style ones) to match the front lights.

Oh and the grille was also replaced with a de-badged grille . Made a huge difference. Originally wanted a recess-style one, but this will do for now. 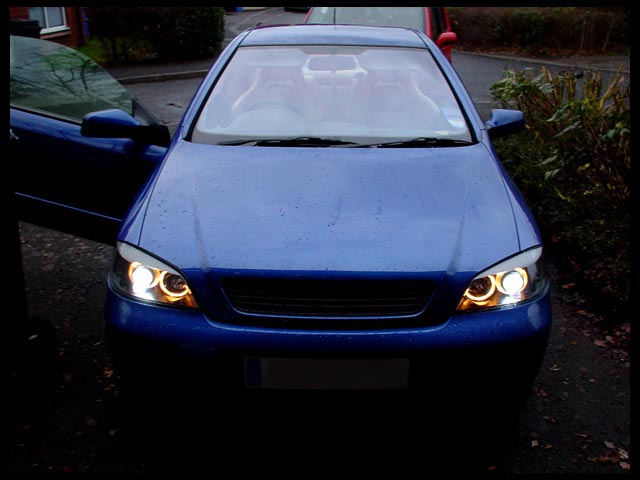